Night Noodle Markets and Art & About 2014

We were there for only a while but we enjoyed the festive vibe of the event starting with this giant Maneki-neko (Japanese for "beckoning cat"). It's huge but it's one of the cutest thing ever. 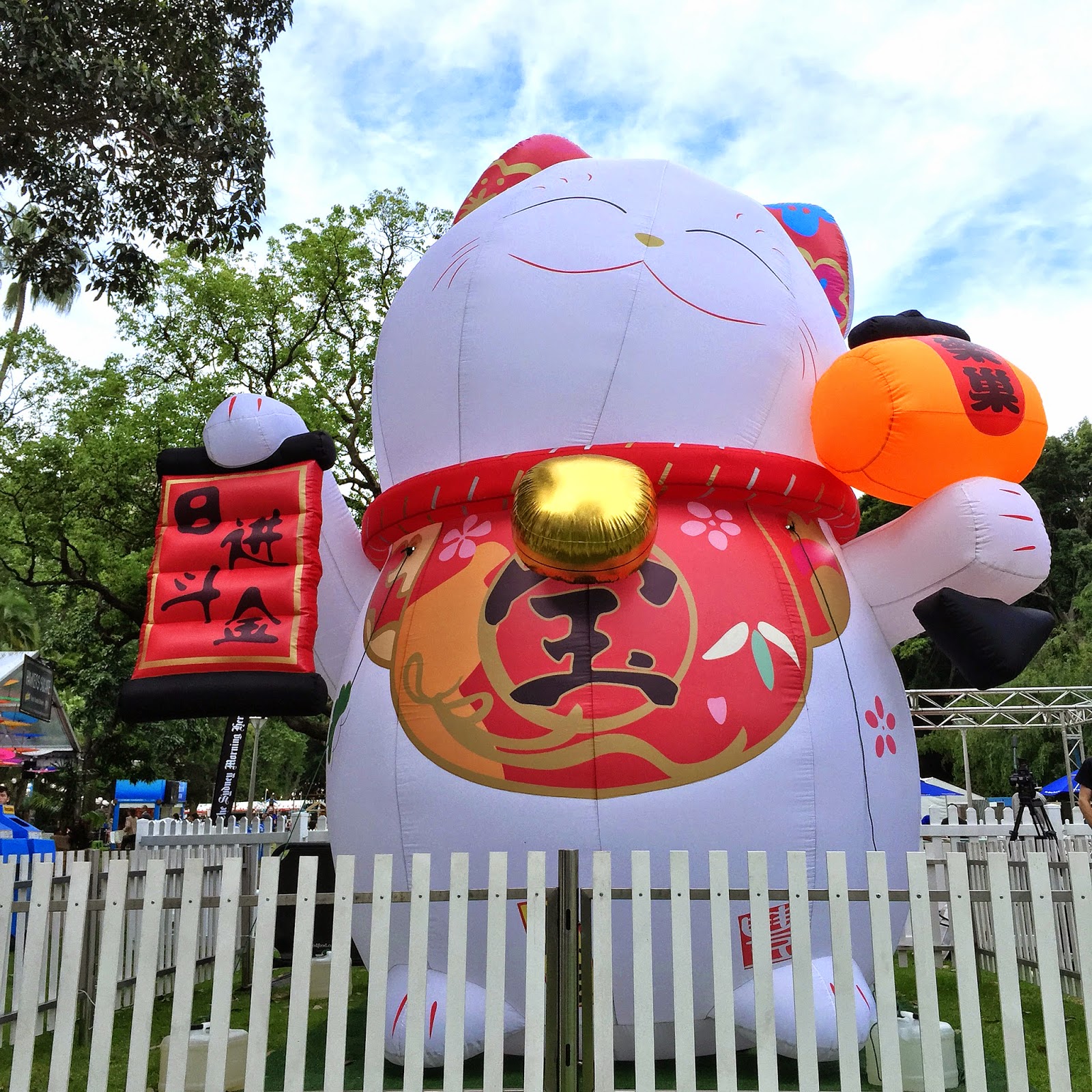 Red lanterns have replaced last year's colourful ones but these looked pretty too. 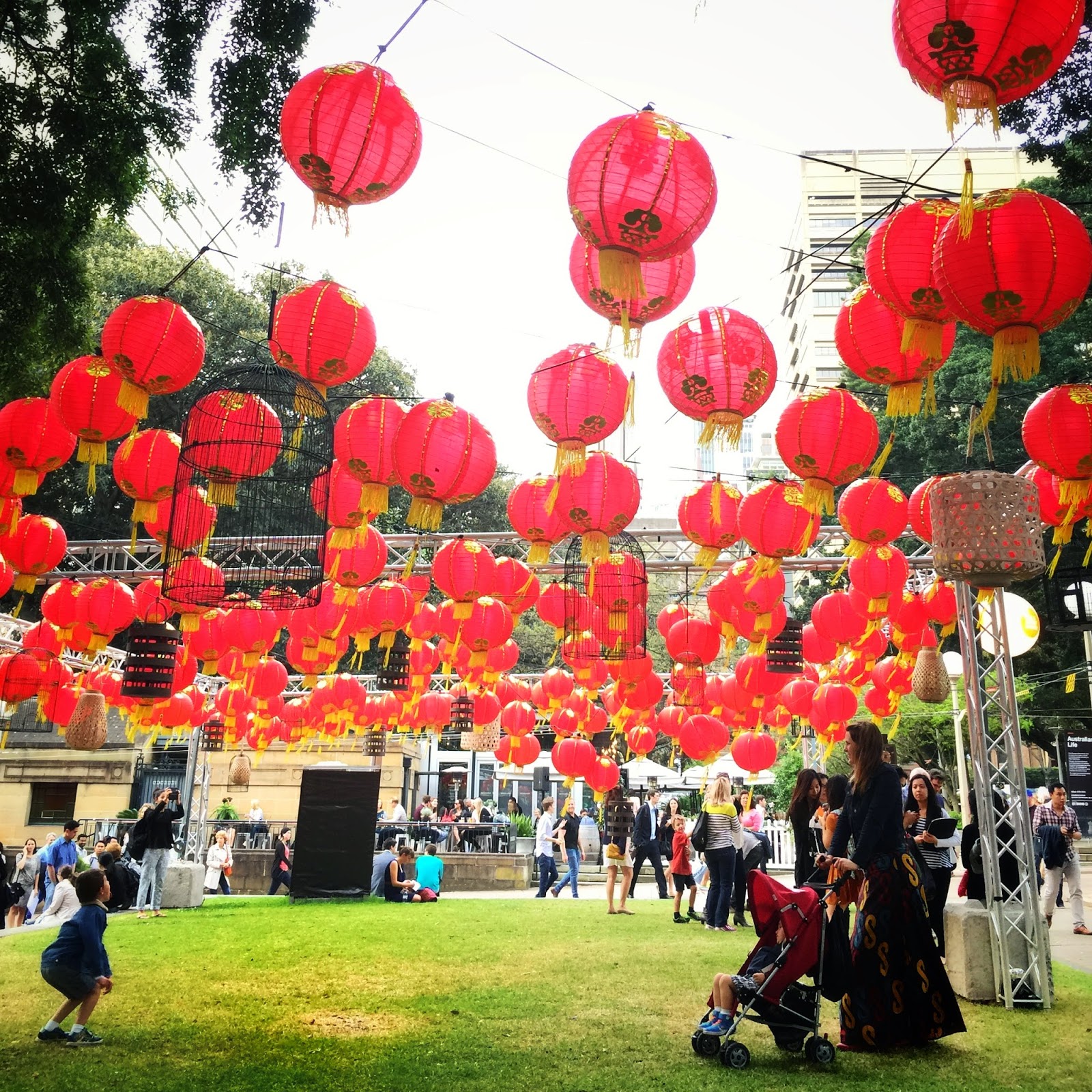 To make up for lack of colour, they have an area where pretty parasols were suspended in air. 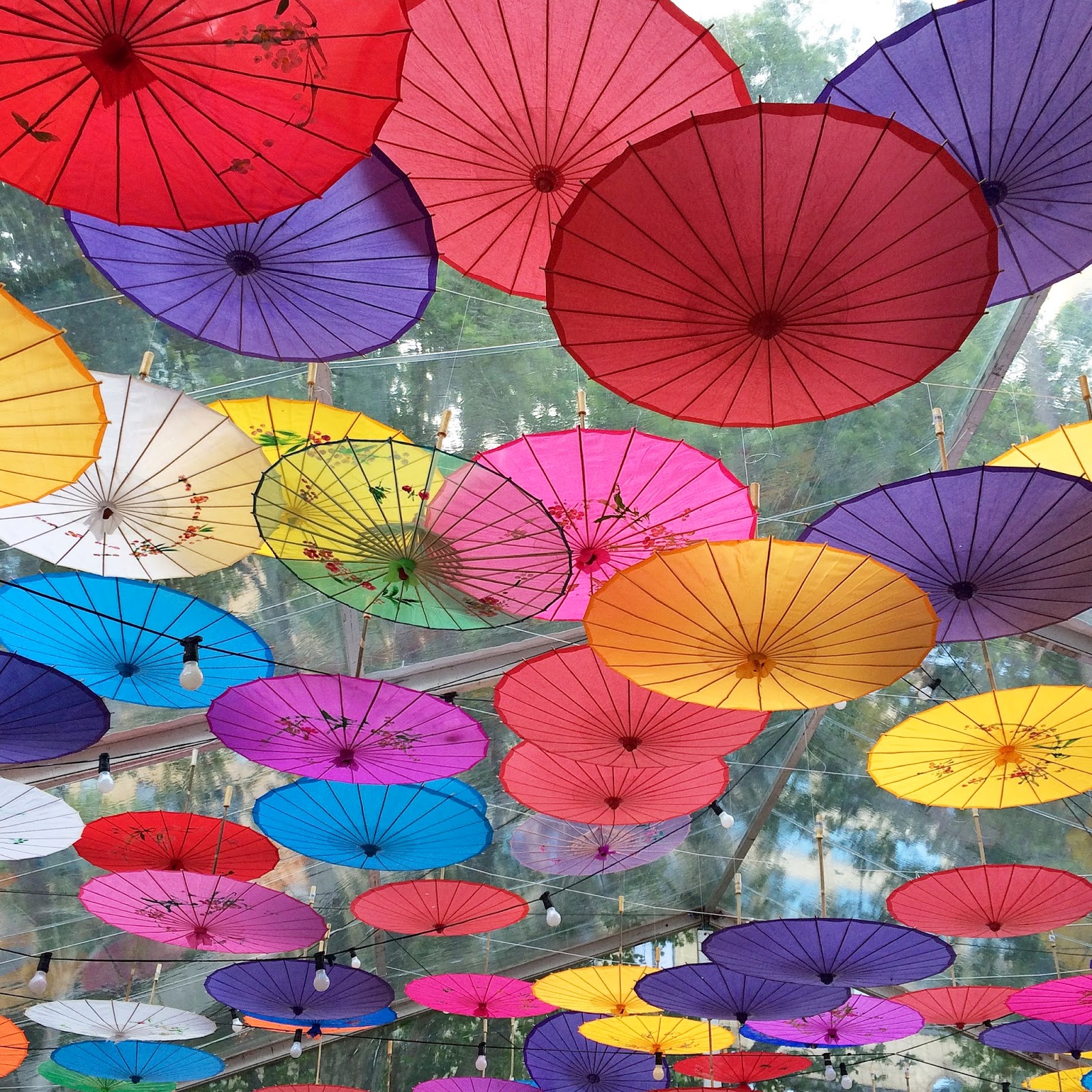 The highlight of our dinner was finding a Filipino stall in this year's Night Noodle Markets.

The Hoy Pinoy team from Melbourne grills delicious Pork Belly and Chicken BBQs for Sydneysiders. They were a bit hit to everyone even if their stall were towards the back end of the park. The smell alone was inviting. I was so proud to see many people appreciating and loving Filipino BBQ. 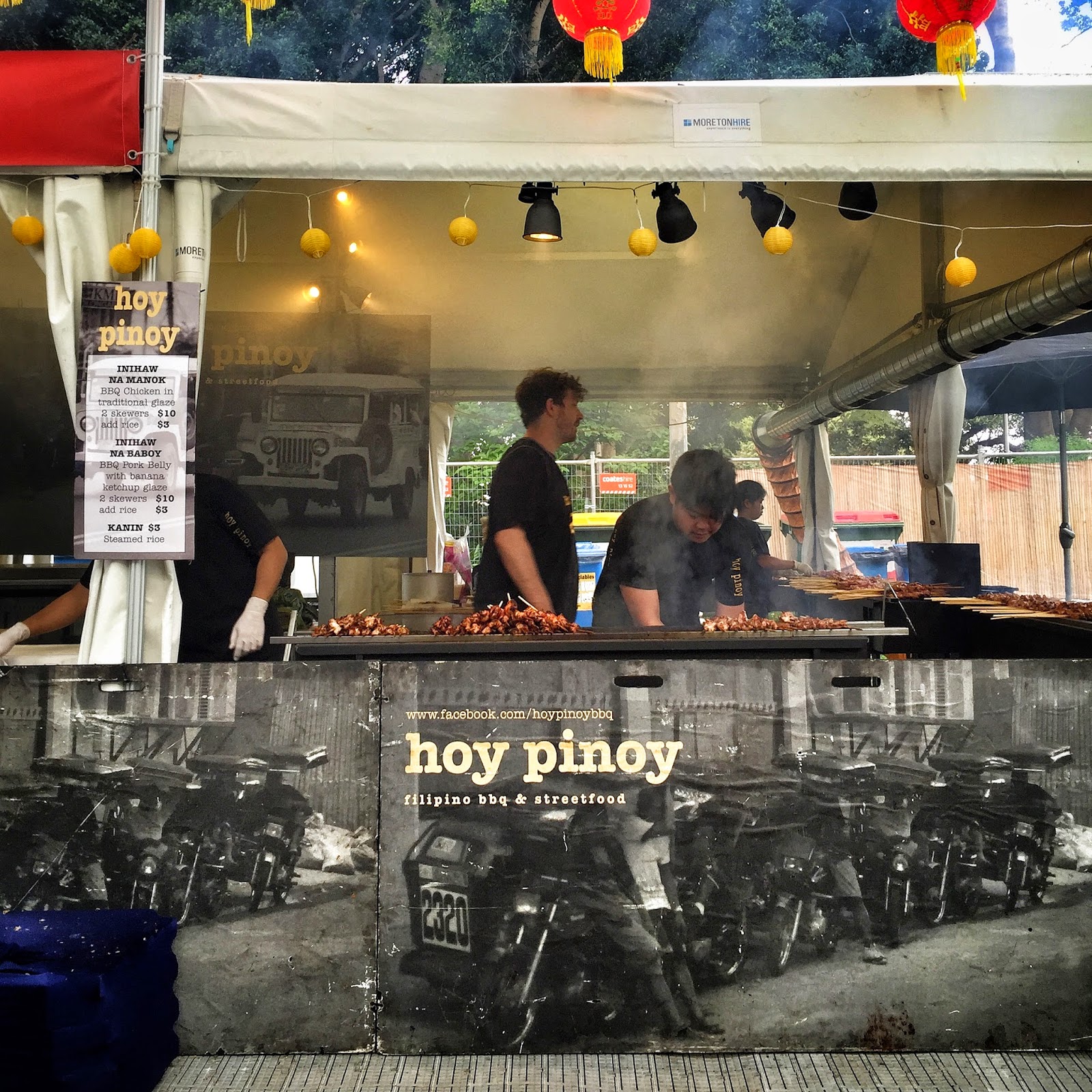 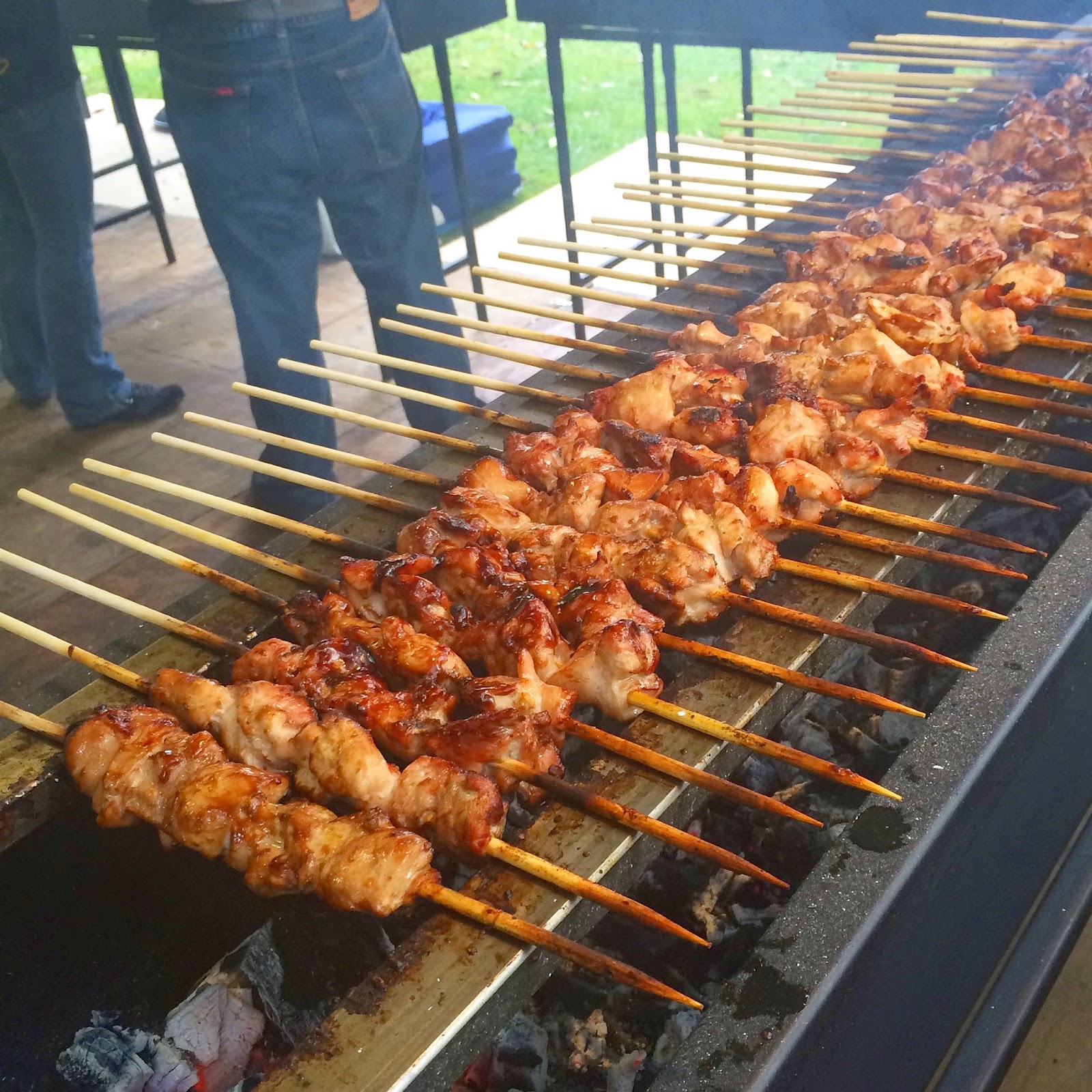 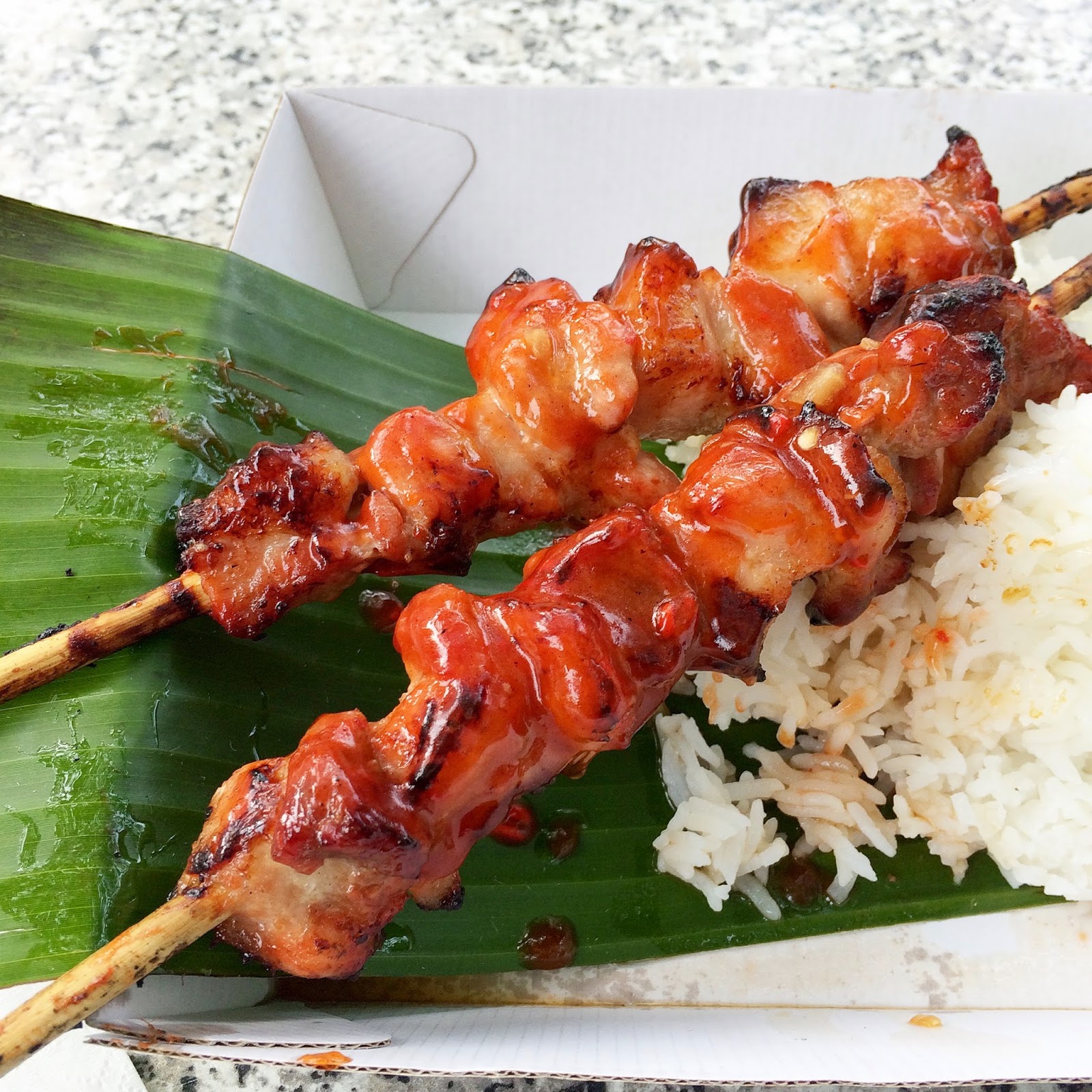 We were lucky to have arrived at 5pm on the first day of Night Noodle Market. I immediately ordered our BBQs to avoid lining up. At 5:20pm, there was a long queue for BBQs already.

The Husband and I shared a skewer each and it was filling enough as we ate it with rice and a noodle dish. The flavour was very Pinoy--there's no other way to describe it. It is very much similar to the BBQ marinade we were used to back home. Balanced flavours of sweet and salty.  If there's one thing they need to improve on, I think it would be for the pork meat to tender as it was a tough and chewy. 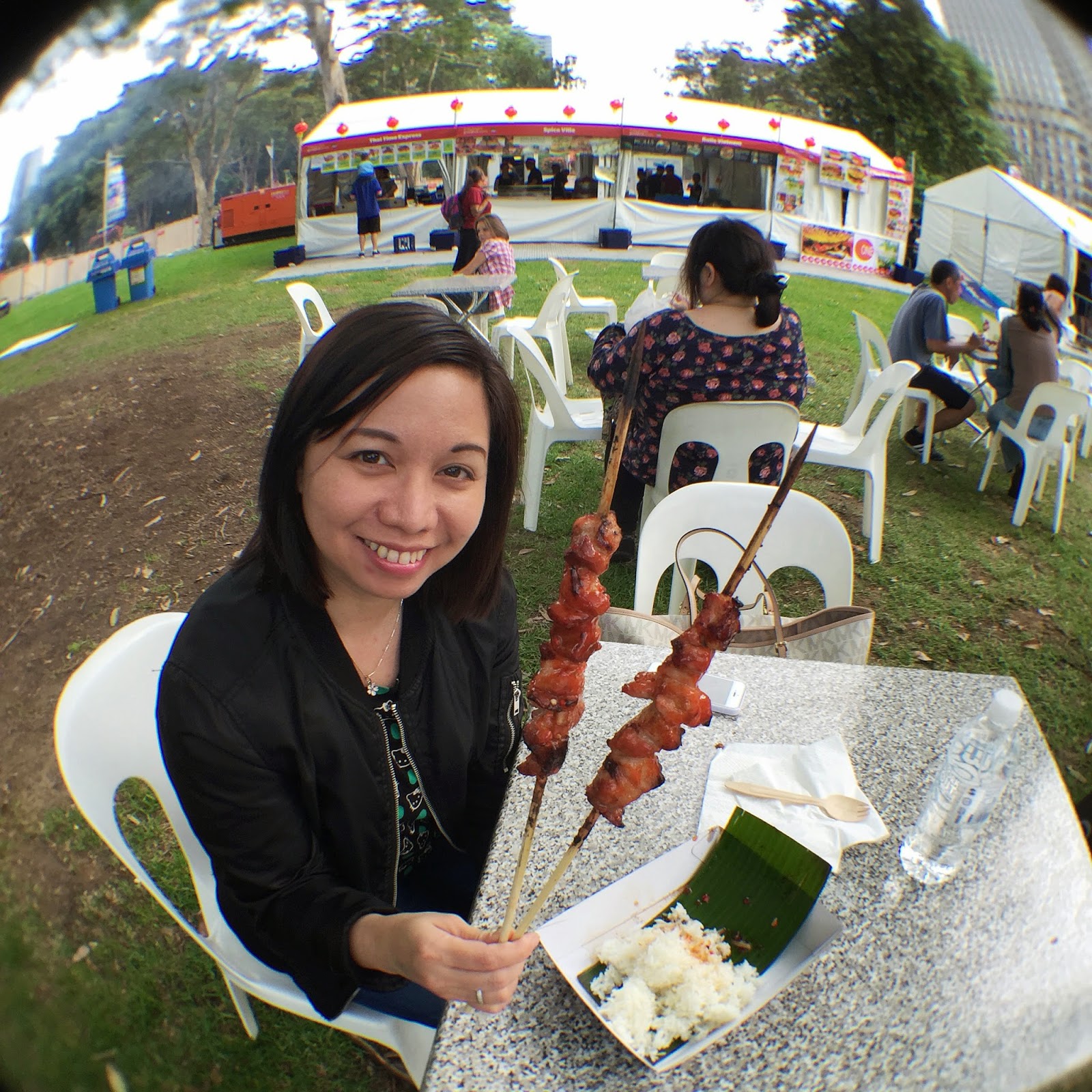 The noodle dish we chose that evening was Pad Thai from Thai Time. Huge serving of noodles with a generous nutty taste. I just wished it had more chicken or seafood in it. 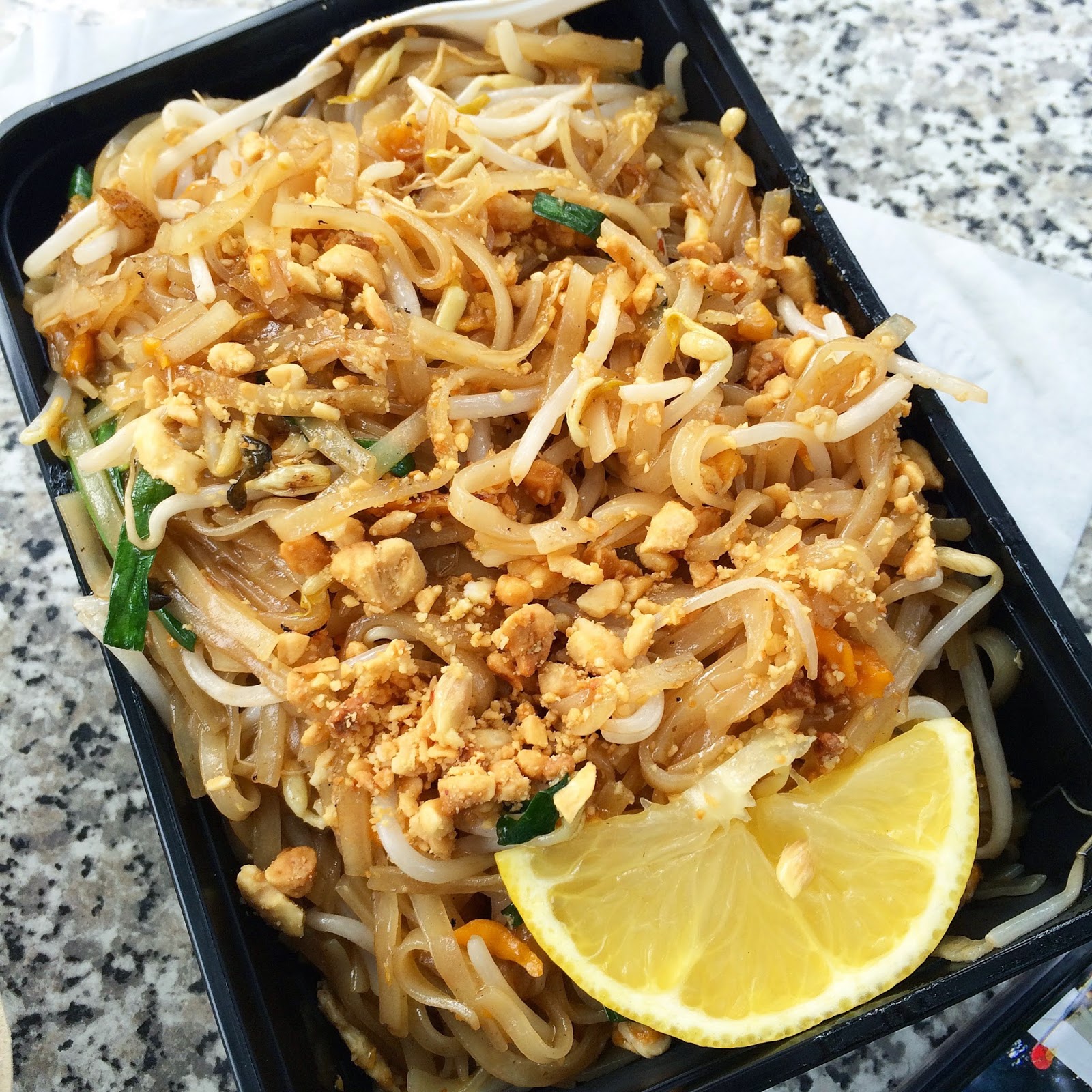 For dessert, we grabbed Egg Tarts, Mango and Taro Pancakes from St. Honore Cake Shop. These are all delightful. The Egg Tarts had a crunchy base and creamy filling. The pancakes had real Mango and Taro inside them. And even if they're filled with cream, they weren't too sweet. 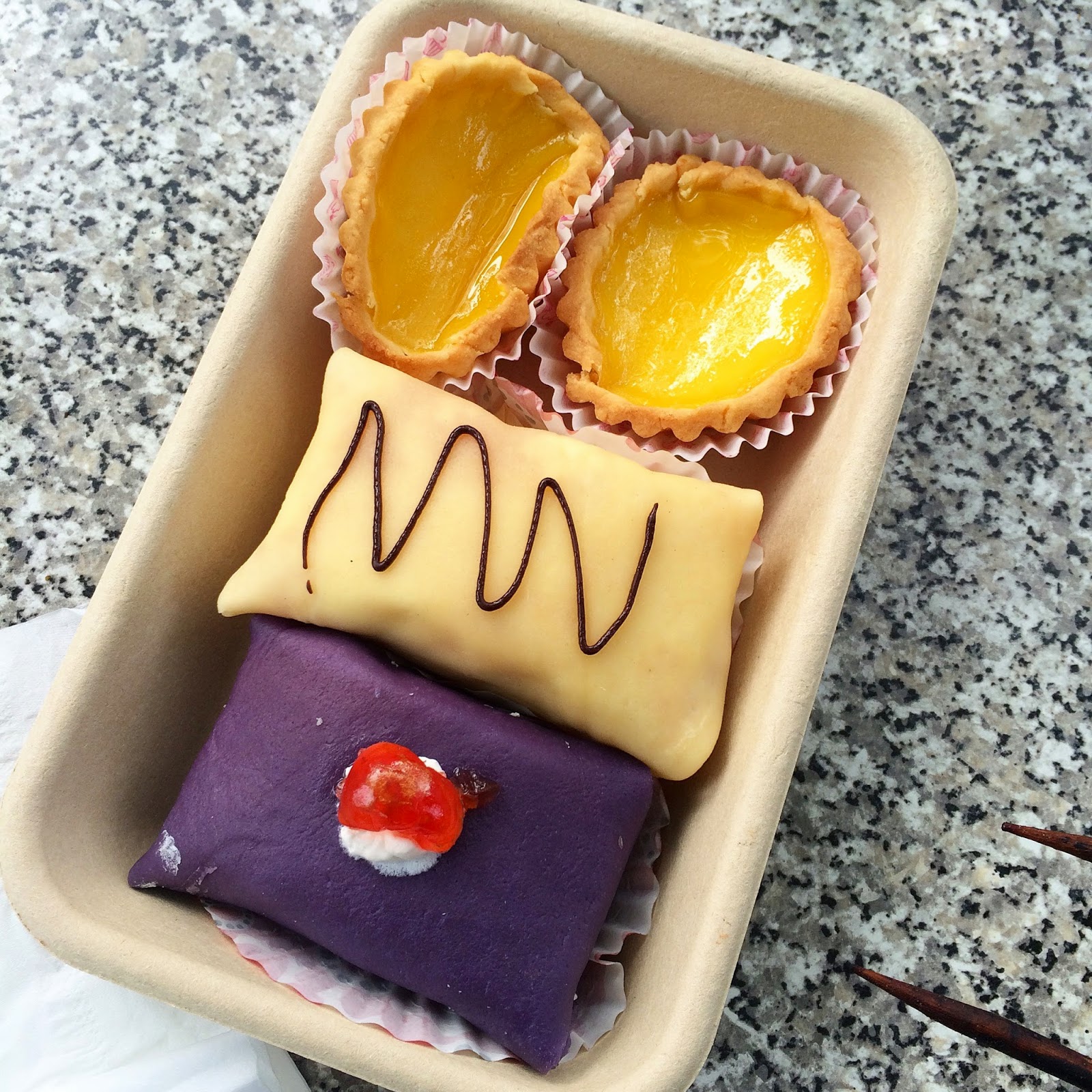 After our filling dinner, we had a bit of a walk in Hyde Park. It's Spring time and the flowers in Hyde Park are in full bloom. 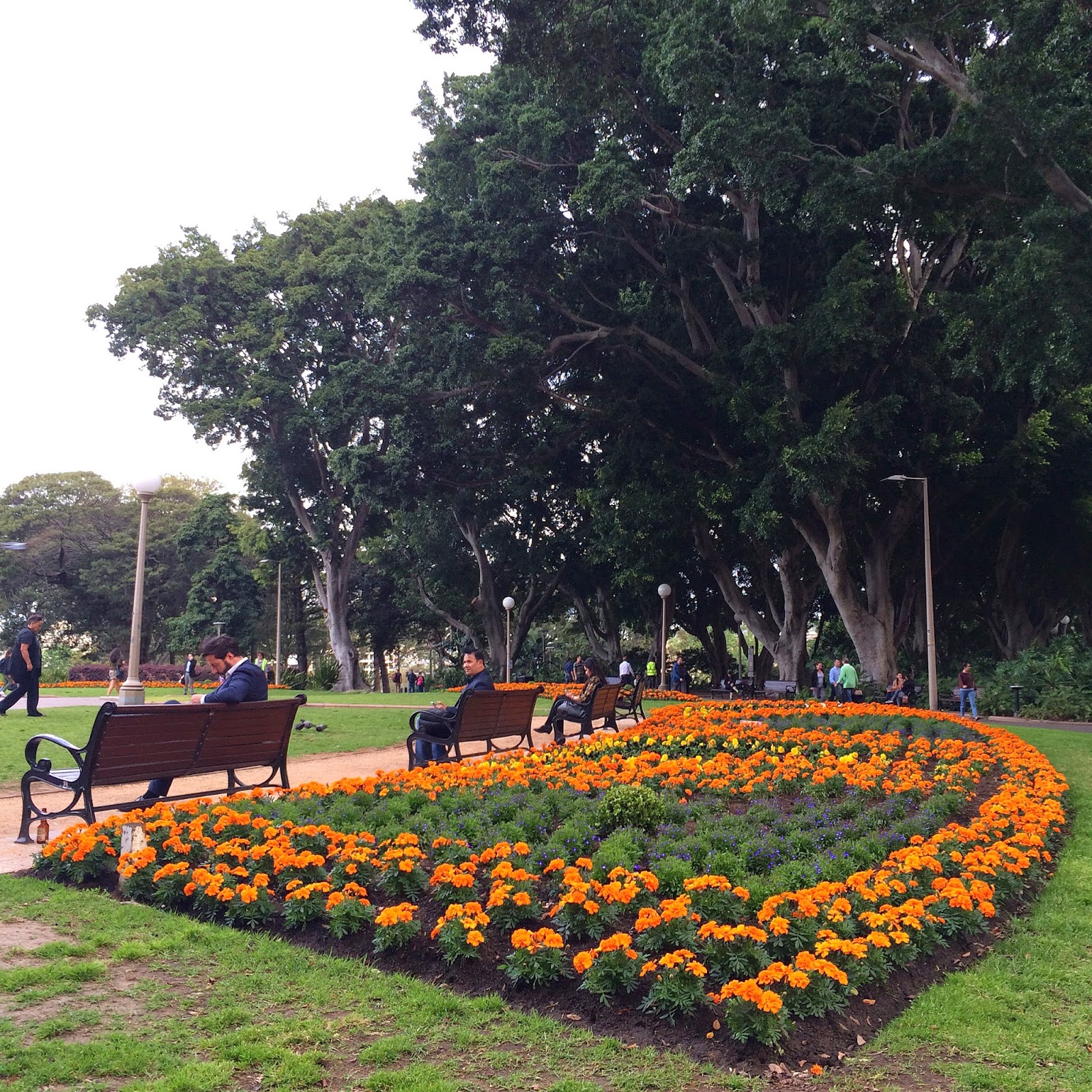 We passed by the Australian Life Exhibition, a take on Australian life shown in large-scale photographs. 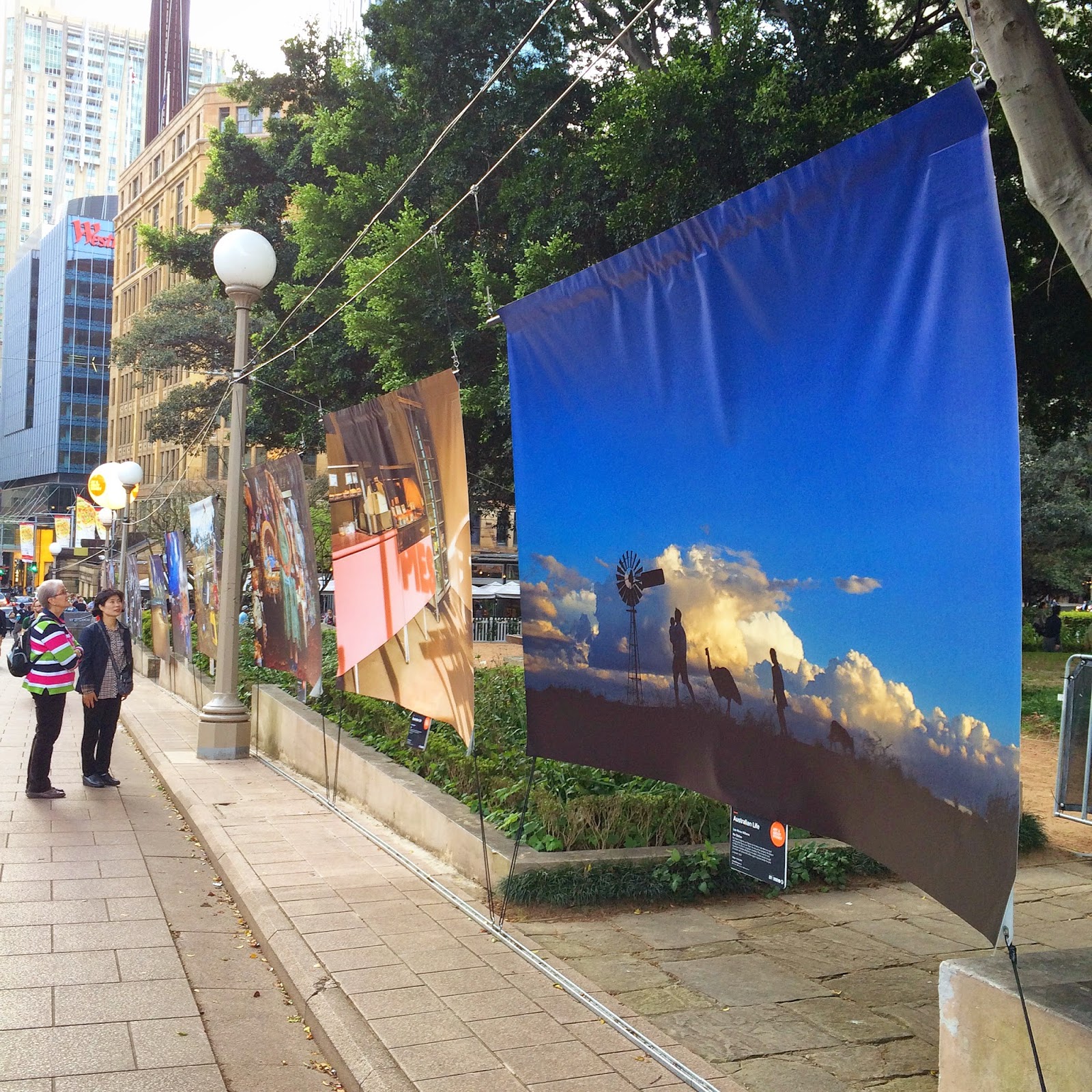 The Australian Life Exhibition has ended as of this writing but the Night Noodle Markets is still on-going until 26th October.