Email ThisBlogThis!Share to TwitterShare to FacebookShare to Pinterest
After reading Eat Pray Love, I instantly became a fan of Elizabeth "Liz" Gilbert. Finding her book was a journey and weaving thru its pages was a learning experience to me. Her next book, "Committed" was another insightful book that related how someone like her made peace with marriage.

Sometime last year, Liz Gilbert started tweeting and it was thru her that I learned that she will have a talk at Sydney Opera House. Her talk will be about Life after "Eat Pray Love" and how she has managed success and pressure when she became one of America's famous authors.

I tweeted about her show and surprise, surprise...she favorited my tweet! :) 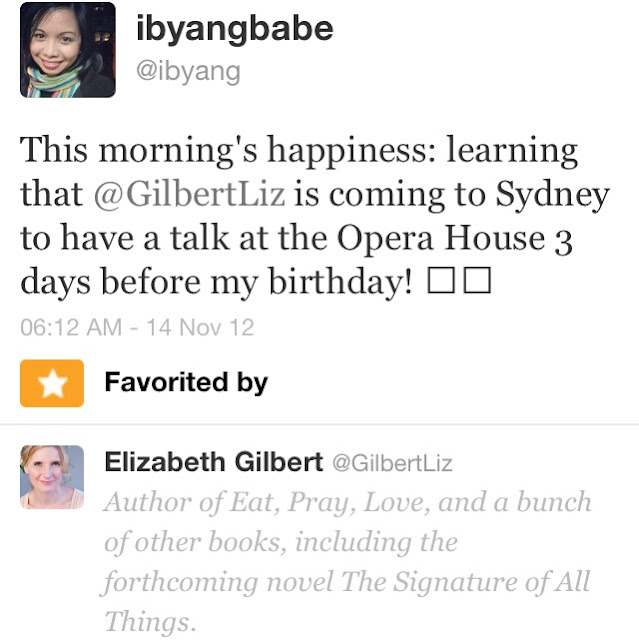 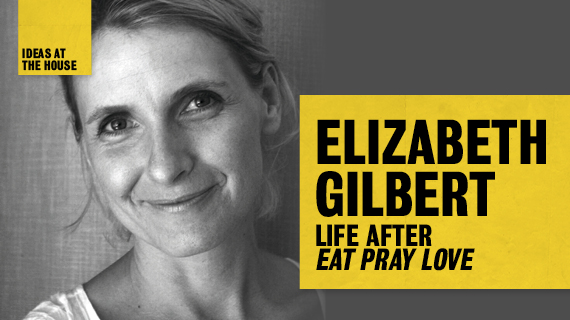 Elizabeth Gilbert is the author of the multi-million-copy-selling book Eat Pray Love, which spawned the Julia Roberts starred blockbuster film of the same name.  Gilbert has also written several other critically acclaimed books and was a writer-at-large for American GQ where she has received two National Magazine Award nominations.

Eat Pray Love, published in 2006, chronicles Gilbert’s trip around the world after her divorce and what she discovered during her travels.  It remained on The New York Times Best Seller list for 187 weeks.

In this talk Gilbert will discuss her life after Eat Pray Love and how she’s dealt with the pressures and expectations of commercial success, the trappings of fame and the inevitable question - ‘after such a huge success, what do you do next?’


I bought tickets as early as November 2012. I feel blessed that I will get to see her and listen to her inspiring story three days before my birthday. I consider this happenstance as one of the universe' gifts to me this year.

As I write this, I'm suddenly reminded how blessed I am too last year when on my birthday, I watched my tennis idol Roger Federer at Rod Laver Arena. While I enjoy the bonuses that life gives me, I am most thankful whenever fate surprises me with once-in-a-lifetime experiences.

If you would like to see Elizabeth Gilbert on 19th January (4:15pm), you can buy tickets via the Sydney Opera House website.
Written by Ibyang at 3:19:00 PM